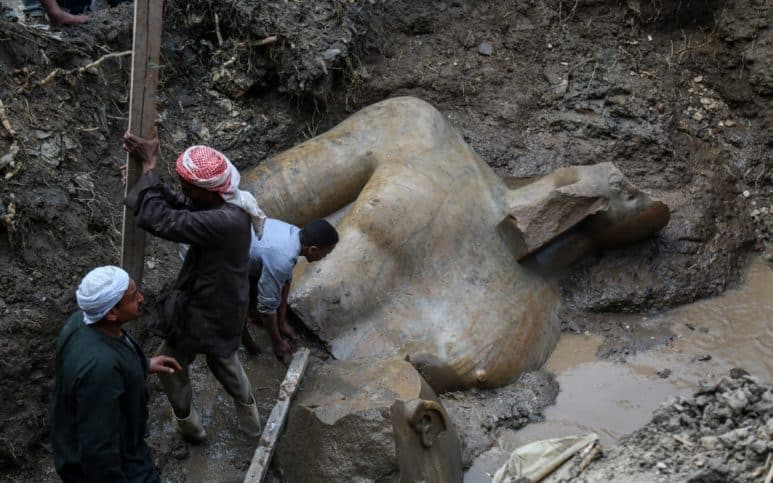 Archeologists from Egypt and Germany have recently discovered an enormous quartzite statue, standing 30 feet tall, from the ground in Matariya – an area of greater Cairo. The statue is an estimated 3,000 years old and is thought to depict Ramesses II. During all that time, the beautiful artwork was buried beneath the streets of a residential neighbourhood of Matariya, which was once the site of the ancient city of Heliopolis.

It is thought that the sculpture once belonged to an enormous temple complex dedicated to the Sun God Re, which was torn apart during the Greco-Roman period. It was one of the largest temples in Egypt, nearly double the size of Karnak at Luxor. Many of the treasures within the temple were lost and plundered. The statue is broken into large chunks, which made it difficult to remove from the muddy pit.

So far, the team have found the lower part of the head and the torso. They have removed the head and have also found the right ear, the crown and a fragment of the right eye. The three tonne torso was slowly lifted out of the mud pit with a crane while dozens of workers supported it.

Egyptologists aim to be able to reassemble the statue in time for the planned opening of the new Grand Egyptian Museum which will be located near the Giza Pyramids. The expedition also uncovered a life-sized limestone sculpture of Pharaoh Seti II, the grandson of Ramses II.

Who Was King Ramesses II?

King Ramesses II was also known as Ramesses The Great and he is thought to be one of the most powerful and celebrated pharaohs of the ancient Egyptian empire. He took on the throne in his late teens and he ruled Egypt from 1279 BC to 1213 BC.

He did a lot of incredible things during his time, including leading several major military expeditions in the Levant and Nubia and reasserting Egyptian rule over Canaan. He expanded the reach of ancient Egypt as far as where modern Syria is located now in the east and modern Sudan in the south. He is also known for establishing the city of Pi-Ramesses in the Nile Delta and when he died he was buried in a tomb in the Valley of the Kings.

His body is now on display in the Cairo Museum. He was immortalised in the famous sonnet by Percy Shelley from the 19th century called “Ozymandias”- the Greek transliteration of his name. He lived around 90 years, a very long lifespan for the time – he outlived many of his children and wives. There were nine other pharaohs in Egyptian history who named themselves Ramesses in his honor.

On your Egypt trips you will have many opportunities to see incredible temples and statues of ancient pharoahs. Our Egypt tours are led by highly knowledgeable Egyptologist guides and they can inform you all about the fascinating intricacies of Egyptian history and culture. To find out more, contact us today!