Immerse Yourself in the Complex of Karnak Temple 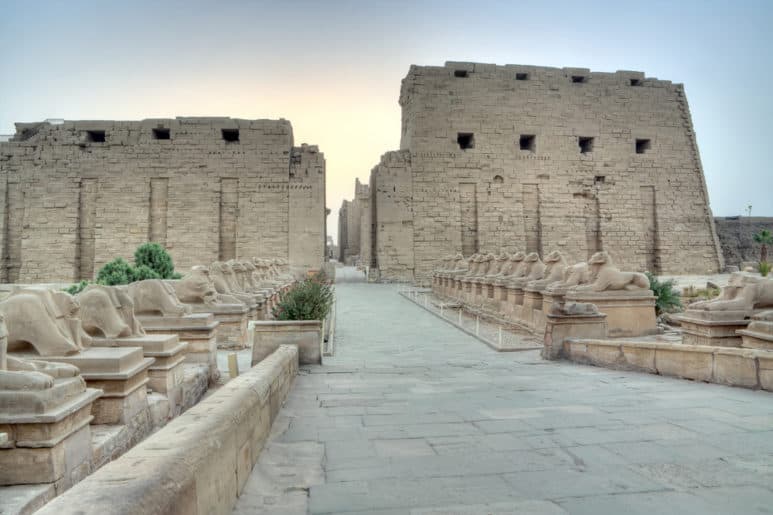 Unrivalled temples, ancient monuments and UNESCO World Heritage Sites abound all across Egypt, and without exception they offer a fascinating and architectural master class into Egyptian history. But perhaps the most impressive of all Egypt’s wonders is the magnificent Karnak Temple. Karnak temple is located about 550 miles south of Cairo and the Great Pyramids. It is also located about 250 miles north of Abu Simbel temple in Aswan.

Dedicated to the Theban cults of Amun, Mut and Khonsu, Karnak Temple is the largest religious structure ever built and, covering an area of approximately 200 acres, it is bigger even than the sprawling main temple of Cambodia’s Angkor Wat. The sacred enclosure of Amun alone covers more than 60 acres, and is so big that St Peter’s Basilica, Milan Cathedral and Notre Dame would fit comfortably within its walls. Karnak is the best place for Egypt family adventure.

The Open Court of Karnak Temple

Located on the eastern bank of the Nile River in modern-day Luxor, construction began 4,000 years ago and continued until the Romans took control 2,000 later, though every Egyptian ruler who built at Karnak left their own architectural signature. Also known by the ancient Egyptians as Ipet-isu, or ‘most select of places’, Karnak remained a place of pilgrimage for two millennia.

Karnak has many significant structures that can be seen in all best Egypt tours, but probably the most amazing is the Great Hypostyle Hall, built by Seti just west of the main sanctuary. The great hall contains 134 columns, and though you may have seen them in images, it’s difficult to appreciate their sheer size without witnessing them in person. The largest twelve of the columns soar skywards seventy feet, each adorned with intricate carvings commemorating significant moments in Egyptian history. On the hall’s outer walls are scenes of Seti and his successor, Ramesses II, defeating enemies from Libya, Syria and the Canaan.

The massive yet incomplete first pylon was the last built, and today is the main entrance into Karnak. It was built by Ethiopian King Nectanebo I in 380 BC, and is reached by the beautiful ‘Avenue of Sphinxes’. The ram-headed sphinxes symbolize the god Amun, and a small effigy of Ramesses II stands between their paws in the form of Osiris.

Named by Thutmose III as the ‘Most Splendid of Monuments’, its roof is supported by many pillars and columns, the outside by thirty-two square pillars, the inside by thin, circular columns symbolizing the tent Thutmose used on military campaigns. A stairway leads to a room called the ‘Chamber of the Clepsydras’. Clepsydras were stone water clocks with a tiny hole at the bottom, which allowed a constant water drip that was used to measure time, by which Temple priests determined the correct hour for religious rites.

Ramesses III’s barque shrine is lined with Osride statues of the king, those on the west wearing the red crown of the south, with those on the east wearing white crowns of the north. Beyond the court is a vestibule leading into a smaller hypostyle hall, which in turn leads into three chapels for Ramesses’ barques. Ramesses III also built Habu temple in the West Bank of Luxor, which is only couple miles away from Valley of the Kings and Valley of the Queens.

The Legacy of Karnak

Once Egypt fell under the control of the Roman Empire in 30 B.C., continued construction at Karnak stopped. “This is a puzzling and enigmatic monument that has no parallels,” wrote Egyptologist Heather Blyth. Cast your imagination back several thousand years, and it’s easy to see that for the largely uneducated ancient Egyptian population, Karnak could only have been a residing place of the gods, and to this day, the semi-derelict yet magnificent archaeological site overshadows many other wonders of the modern world, just as awe-inspiring to contemporary visitors today as it was for pilgrims several millennia ago.

Are you ready to visit Karnak temple in one of our Egypt luxury tours? Check out all of our offerings for Egypt vacation packages